You. We know *you* are vice-free, dear Daily Post reader. But, or perhaps we should say, “butt,” others around you and in your life are riddled with vices: they smoke; they eat too much celery; they hog the covers; they can’t keep their hands out of the office candy bowl. Which vice or bad habit can you simply not abide in others?

Christianity teaches that there are seven cardinal vices, also referred to as the seven deadly sins;  wrath, greed, sloth, pride, lust, envy and gluttony.   I thought long and hard about which of these I just can’t stand to see in other people, and I realised that in fact I can tolerate any or all of them, provided I am not subjected to prolonged exposure, or the person does not carry on whatever vice they indulge in beyond a reasonable limit.

Let’s face it:  people are not perfect. We have all been guilty, whether we admit it or not, of at least one if not all of the seven.  For me, the most unacceptable trait of all is intolerance, and I find it very telling that Christianity, as it has been interpreted by those who have control of such interpretation, does not teach that there are eight cardinal vices. Or, more properly, that intolerance is the only one that counts.

There is always the possibility of mitigating circumstances for the traditional seven, for example:

But there is no excuse for intolerance. So, before you sound off against whatever vice gets your goat, stop and think carefully – are you guilty of The Cardinal Sin?

Daily Prompt: Never Gonna Give You Up – Picture – Hieronymus Bosch (circa 1450–1516) [Public domain], via Wikimedia Commons

5 thoughts on “Daily Prompt: Never gonna give you up”

This site uses Akismet to reduce spam. Learn how your comment data is processed.

Love me, love my dogs and cats. You’d better be nice to my fish too… and the spider that lives in the shower. . and the robins in the garden shed…not to mention the confused hedgehog that Princess Chloe The First believes to be an uncooperative football.

A comment from Words4JP on my sister Izzy’s post for Michelle’s Weekly Pet Challenge inspired me to search out this song.   Poor Neil – if I’d only known you then, I would have kept you company far better than any imaginary friend

Here I am modelling this year’s St Patrick’s Day look for Yours Truly Confused. She chose some rather fetching tri-colour neckwear and some absolutely ridiculous headbands with bobbly ornaments. Lucky for me, my headband proceeded to collapse as soon as she placed it on my majestic head.  I’ve decided to perch on the kitchen couch […]

Adopting my favourite tactic to remove a sister from the couch.  Princess Chloe the First is not co-operating.

A woman of taste and discrimination

I was intrigued to learn about The Diva’s friend Naomi who is grooming Dogs for FREE for Dog Pounds/ Dog Rescue Centres . She says: “We all need a bit of TLC & so do these poor dogs that arrive in a poor state for rehoming”. I couldn’t agree more. So I had a look […]

5 Tips on Preventing Obesity in Your Dog

5 Tips on Preventing Obesity in Your Dog Pay attention to this!

Yours Truly Confused exercised her weird obsession with occasion-appropriate accessorised photographs again yesterday morning. As the senior lady, I got to wear what she laughingly referred to as a more mature look – a kelly-green tinsel boa. I tolerated this lunacy long enough to allow her the chance to get some reasonable pictures (but I […]

Write a post entirely in the present tense. Look, human, you know I haven’t got opposable thumbs. I need your help here.  My Facebook friends need an update.  There are no new posts on Princess Chloe the First.  My fans don’t know what’s going on. You’re spending far too much time writing your own stuff […]

Eeeek! (It must be Christmas again)

Ooo gawd.. there is something weird going on here .. what’s that I feel on my head? Yours Truly Confused has the camera out, so I’m going to have to put a brave face on it. Hopefully if I’m really, really, good with this pose,  I’ll get some of those munchies she’s waving over her […]

As my mom over on Occasional Stuff has decided that each of us has to have a turn to enter this challenge, I decided to take matters into my own hands and post my own entry. Here I am with my brother Shiloh Michelle’s Weekly Pet Challenge 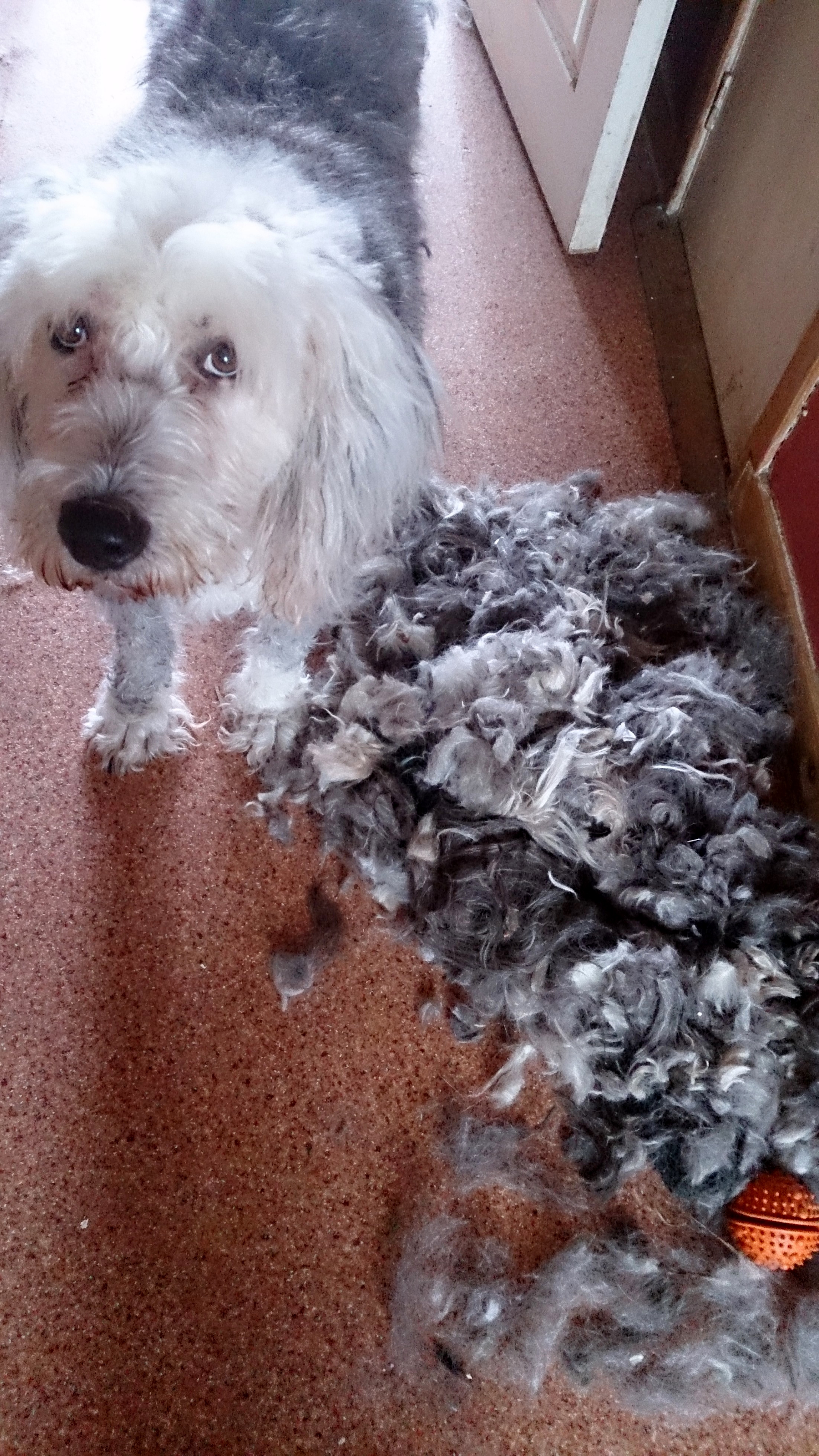 Well, I suppose as I managed to make it as far as March before Yours Truly Confused broke down and got the scissors out, I’ve been doing quite well in the battle to remain scruffy. This morning she launched a dawn attack and chopped off all of my carefully arranged carpet, then hauled me into […]

The question asked was: Which quirky habit annoys you the most, and what quirky habit do you love — in yourself, or others? I could say the same quirky habit of Izzy The Diva’s  that annoys me the most is also one that I love. Izzy the Diva is a pedigree Old English Sheepdog, and I’m sure […]

I avoided the winter haircut this year (whee!). I was booked for December, but the roof of Baskerville Manor broke or something, Anyway, the long (and not short) of it is that she hasn’t got the strength in her arm any more to cut me herself and there is no budget for a groomer until […]

I’m NOT a pillow…

Just because I have the biggest, fluffiest rear-end in the house doesn’t mean that I can be used as a pillow.  There I was, minding my own business, having a nice snooze on what used to be my futon when The Big Guy clambers up behind me and plonks his two-ton head on my lovely […]

Share your best posts on the Shared Posts page

The best of the literary web

New adventures in home improvement
A Word in Your Ear

Stories and Photographs of my travels, Tales of friends, family, animals and my life

A Mind Ready to Explode!

Will do just about anything for food

I am the angelic darling of Baskerville Manor. Butter would not melt in my mouth (because I've scoffed it already).

Handsome, debonair. AKA Chunkalove, Big Shiloh is a dog for all couches