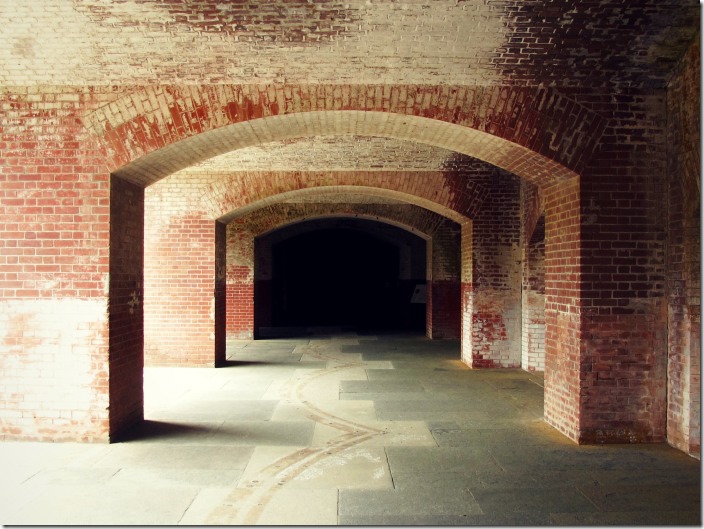 For this week’s challenge, use one of the images in this gallery as a starting point for a short story, poem, free-write, or musing on whatever you’d like.

One of Ezra Pound’s statements on the image is: “that which presents an intellectual and emotional complex in an instant of time”.  In this context, I can’t really see why this picture was captioned “Emptiness” – to me it is packed full with all sorts of possibilities.  There is light, shade and space.  Curves and angles.  Bricks and mortar. You don’t have to be a student of architecture to appreciate this expression of the art of stonemasonry, with its beautifully curved arches and the sharp, clean lines of the supporting columns.The series of arches lead to a dark, mysterious space which hints at more arches beyond and it doesn’t take much to imagine them repeating onwards into infinity.

Even though the colours are fading and the whitewash is peeling, there is a sense of strength and readiness, or a feeling of a stage set, waiting for the props to  be set up and the actors to take their place.

The patchy whitewash and colour variations in the brickwork  tell me the building is ageing, and the lighter paving with the regular curved pattern appear to be markers for something, perhaps machinery, that needed to be lined up in a particular way.  Combined with the way the whitewash seems to stop half-way up the walls, I get a sense that this is a utilitarian place, a place with a purpose.  It’s not clear whether it still serves whatever purpose this might be or have been.

As I examined this picture I started imagining what I would do if it was my space.  I would fill it with tall green plants and hanging baskets and  sculptures and tables and seats.  Maybe wind chimes too. The brick walls could carry paintings or hangings, and feeders to encourage birds to fly in and out. People could sit there on a sunny afternoon and listen to their chatter. Assuming, of course that the space I am looking at isn’t located in some well-lit basement, and not open to the elements.

Kids could play there too – I know of two little boys who would get endless amusement from following those curves on their bikes, or using them as tracks for a remote-control car.  With some strategic netting, we could construct a make-shift racquet-ball court, or be very daring and architecturally vandalous by hanging a swing from one of those staunch arches.

Another alternative would be to set  up market stalls. I can visualise them lined up, packed with random, colourful merchandise and a crowd of shoppers strolling through.

There would be buskers too, of course. I wonder how the structure might impact on the acoustics – sound bounces – would there be echoes or sound delays from one end of the building to another?

There was no information about the building in the photograph, except the file name. To get some context , I Googled this name and found that it was taken at Fort Point in San Francisco, part of the Presidio. it’s likely that American participants in this challenge would have recognised this. Please forgive me for my ignorance, I’m just a virtual tourist.

This is a picture from Wikipedia showing cannon displayed under what might be the same arches. My guess about the light coloured slabs and the curved pattern was on the mark – guide mark to be precise.  The lighter slaps were surely there to indicate proper placement and, I’m not sure about this, but the curved patterns could be either striations from bringing the guns to bear on a target, or a type of track to help manoeuvre them either from side to side or into place – it’s hard to see in either photograph.

My little bout of research tells me that this building dates from the Civil War, but that its guns were never fired in battle.  I imagine that they were at least used in practice, and in those spaces, the noise when the cannon were fired must have been incredible. Small wonder the building looks so solid, it was clearly built to resist the reverberation when these behemoths were active.

Here’s the fort from another angle.  This image, taken in 1870, is taken from the US National Park Service website. You can see that there were at least three tiers of cannon placements, facing in two directions.  It seems it was a cutting edge installation at the time, the only one of its kind on the Pacific Coast, and a source of some pride to the military.

The 1870 picture reminded me of another, more ancient structure:

This picture is from Rome Art Lover.it  which has a whole page devoted to the Roman architecture.  The arches above are part of the Coliseum and the ones below are the Porta Asinaria

It would be interesting to come back in a 1,000 years or so to see whether the arches at Fort Point have fared as well as some of their ancient predecessors.

Back to “Emptiness”:  This picture of space enclosed by architecture is full of ideas.  It provided me with a starting point to learn a little about American history and Roman architecture.  On the way to completing this piece, I also looked at ancient Egyptian and Greek monuments that featured arches.  I got to fantasise about what I would do with the space – a favourite pastime of mine.

Outside my own thoughts and impressions, there is the story behind how and why the image was taken in the first place.  What were the circumstances?  Was it a professional assignment, or a personal visit? Why that particular spot and not another?  Did the photographer have to wait for a moment when there was nobody there, had someone just left the frame, or was somebody about to step in?

Returning to my original point, could I suggest to the photographer that when it comes to images, the word “emptiness” never applies, and maybe he or she could reconsider the title? For example:

This site uses Akismet to reduce spam. Learn how your comment data is processed.

Love me, love my dogs and cats. You’d better be nice to my fish too… and the spider that lives in the shower. . and the robins in the garden shed…not to mention the confused hedgehog that Princess Chloe The First believes to be an uncooperative football.

A comment from Words4JP on my sister Izzy’s post for Michelle’s Weekly Pet Challenge inspired me to search out this song.   Poor Neil – if I’d only known you then, I would have kept you company far better than any imaginary friend 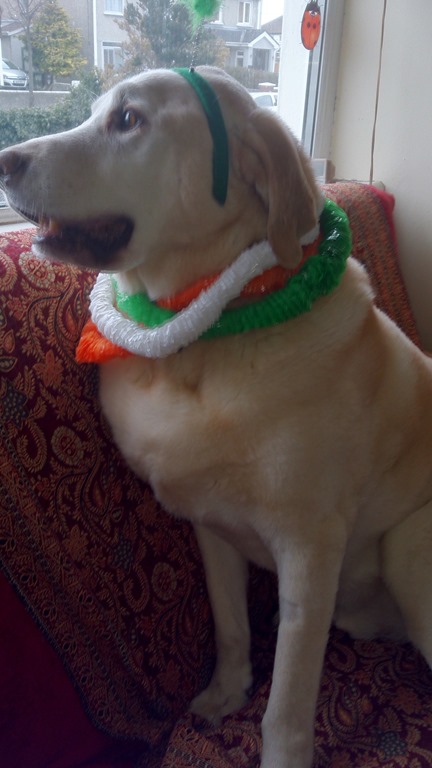 Here I am modelling this year’s St Patrick’s Day look for Yours Truly Confused. She chose some rather fetching tri-colour neckwear and some absolutely ridiculous headbands with bobbly ornaments. Lucky for me, my headband proceeded to collapse as soon as she placed it on my majestic head.  I’ve decided to perch on the kitchen couch […] 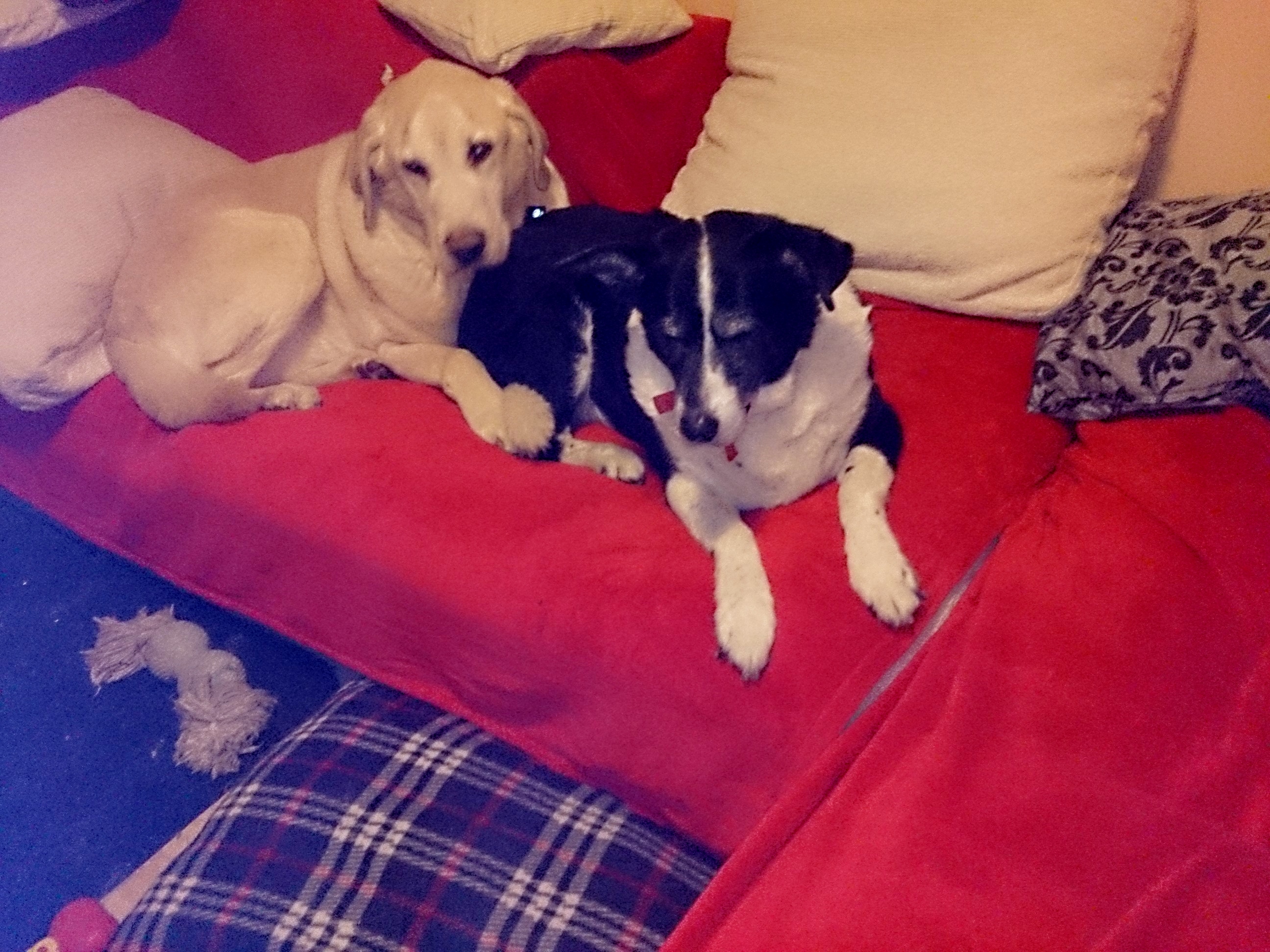 Adopting my favourite tactic to remove a sister from the couch.  Princess Chloe the First is not co-operating.

A woman of taste and discrimination

I was intrigued to learn about The Diva’s friend Naomi who is grooming Dogs for FREE for Dog Pounds/ Dog Rescue Centres . She says: “We all need a bit of TLC & so do these poor dogs that arrive in a poor state for rehoming”. I couldn’t agree more. So I had a look […]

5 Tips on Preventing Obesity in Your Dog

5 Tips on Preventing Obesity in Your Dog Pay attention to this!

Yours Truly Confused exercised her weird obsession with occasion-appropriate accessorised photographs again yesterday morning. As the senior lady, I got to wear what she laughingly referred to as a more mature look – a kelly-green tinsel boa. I tolerated this lunacy long enough to allow her the chance to get some reasonable pictures (but I […]

Write a post entirely in the present tense. Look, human, you know I haven’t got opposable thumbs. I need your help here.  My Facebook friends need an update.  There are no new posts on Princess Chloe the First.  My fans don’t know what’s going on. You’re spending far too much time writing your own stuff […]

Eeeek! (It must be Christmas again)

Ooo gawd.. there is something weird going on here .. what’s that I feel on my head? Yours Truly Confused has the camera out, so I’m going to have to put a brave face on it. Hopefully if I’m really, really, good with this pose,  I’ll get some of those munchies she’s waving over her […]

As my mom over on Occasional Stuff has decided that each of us has to have a turn to enter this challenge, I decided to take matters into my own hands and post my own entry. Here I am with my brother Shiloh Michelle’s Weekly Pet Challenge

Well, I suppose as I managed to make it as far as March before Yours Truly Confused broke down and got the scissors out, I’ve been doing quite well in the battle to remain scruffy. This morning she launched a dawn attack and chopped off all of my carefully arranged carpet, then hauled me into […]

The question asked was: Which quirky habit annoys you the most, and what quirky habit do you love — in yourself, or others? I could say the same quirky habit of Izzy The Diva’s  that annoys me the most is also one that I love. Izzy the Diva is a pedigree Old English Sheepdog, and I’m sure […] 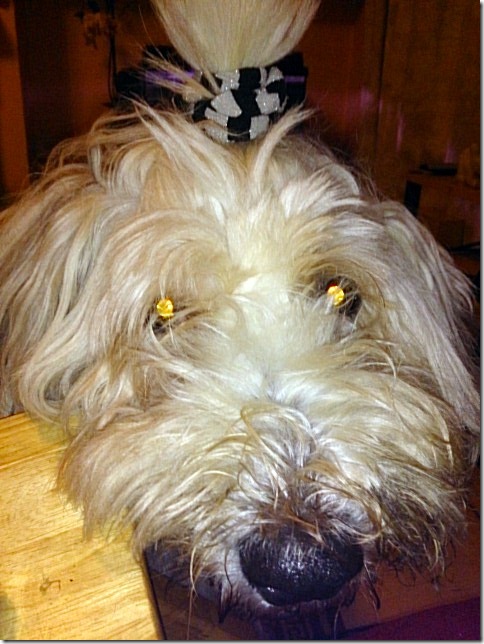 I avoided the winter haircut this year (whee!). I was booked for December, but the roof of Baskerville Manor broke or something, Anyway, the long (and not short) of it is that she hasn’t got the strength in her arm any more to cut me herself and there is no budget for a groomer until […]

I’m NOT a pillow… 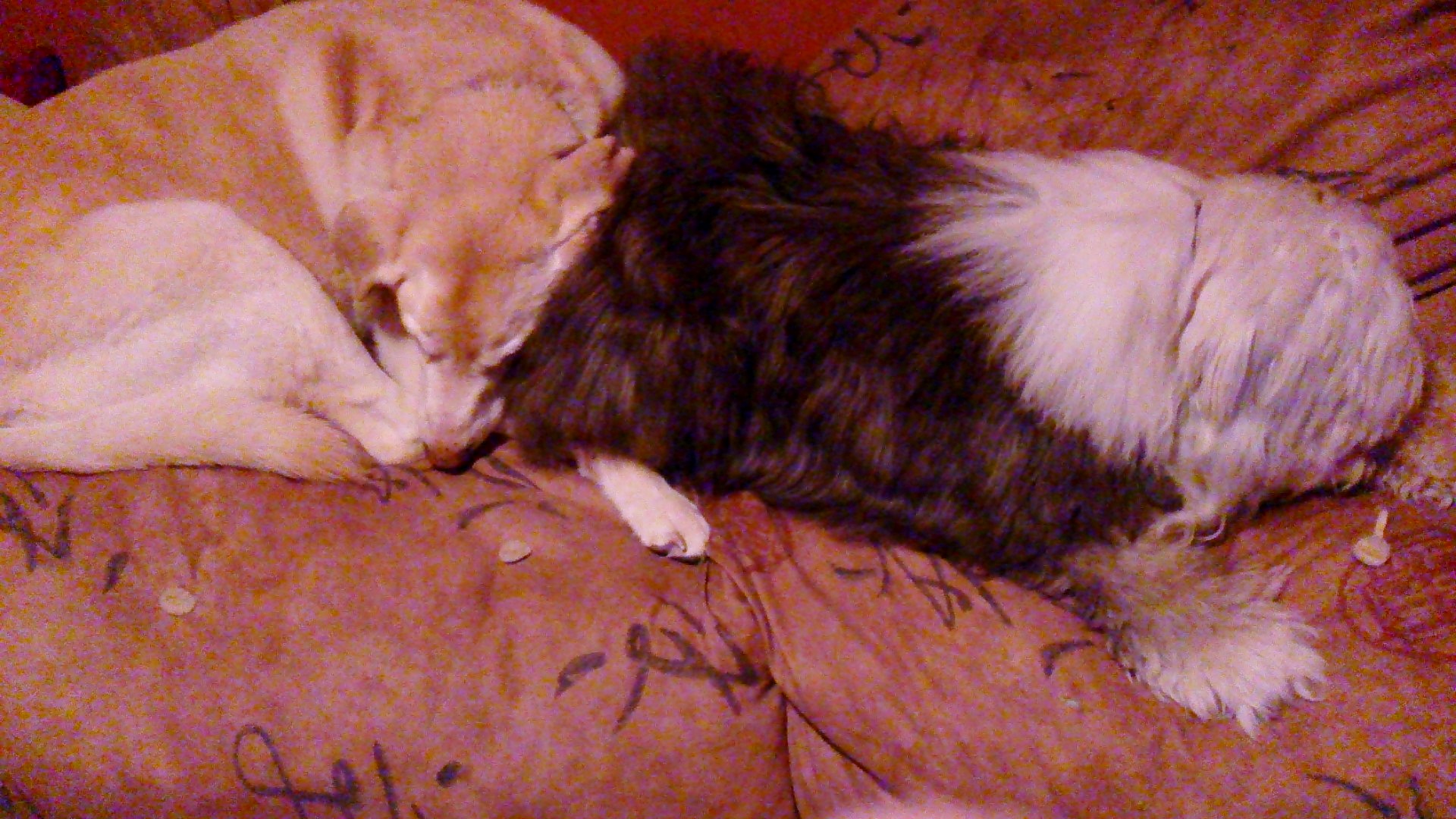 Just because I have the biggest, fluffiest rear-end in the house doesn’t mean that I can be used as a pillow.  There I was, minding my own business, having a nice snooze on what used to be my futon when The Big Guy clambers up behind me and plonks his two-ton head on my lovely […]

Share your best posts on the Shared Posts page

The best of the literary web

New adventures in home improvement
A Word in Your Ear

Stories and Photographs of my travels, Tales of friends, family, animals and my life

A Mind Ready to Explode!

Will do just about anything for food

I am the angelic darling of Baskerville Manor. Butter would not melt in my mouth (because I've scoffed it already).

Handsome, debonair. AKA Chunkalove, Big Shiloh is a dog for all couches